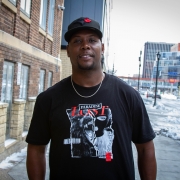 “You have to survive the rough to get where you want to be.”
Louis has worked hard to overcome obstacles that seem almost insurmountable. But now, he owns a restaurant and is looking toward opening more.
Four years ago, a series of events seemingly conspired to destroy Louis.
First, his partner of eight years ended their relationship, leaving Louis homeless without warning. He spent two months living in his car until another program recommended him to House of Charity.
“I do have a felony record so it was kind of hard to get this place but the landlord and my advocate said ‘we’re going to give you a second chance.’ That just meant the world to me because you know, as a felon, I already can’t get places on my own.
So that was just right on time, I’m in a place, loving it, everything is great, start building my life. And then, boom…”
His cousin was killed; a man named Philando Castile.
In the next days, he watched, amazed, as his community and the world rallied around them.
A few days later, after taking his kids to a pool and staying at their mom’s house, he was arrested while driving home.
The charges? Throwing molotov cocktails at police the night before. Louis was shocked; he didn’t even know what a molotov cocktail was.
For two years, he fought the charges, knowing that if he lost, he would face a 20-year prison sentence. That’s how he met the woman he calls his guardian angel, Sarah.
She helped him get the charges dropped and figure out what to do next after losing everything because of a false arrest.
One day while they were chatting, she said he needed a job and asked how he felt about starting a vegan food truck.
In the two years since Sarah asked that question, Louis served plant-based pop-ups that sold out in a few hours, purchased a brick-and-mortar building on Lake Street and became the sole owner of a plant-based soul-food making restaurant called Trio Plant-Based.
Trio is a successful business but they are still just scraping by.
“House of Charity is a blessing to me still at this moment because I don’t get paid. I work seven days a week and I don’t get paid but I’m fine with that only because I know where this place is going.
Every person person at House of Charity is a blessing because a lot of times when people are in this program, they’re alone. That moment of just somebody coming to see and talk to you is such a relief.”
From homelessness to a restuarant owner. And he’s not stopping there.
“My vision for Trio is to have one in each of our cities, we need it. Right in the middle of black communities to change eating habits.”
He has faced more than any person should, but he doesn’t see it as a bad thing.
“It all came from an act of racial injustice. It’s our history. It’s my kids’ history, it’s your kids’ history. It’s history for our community. What happened and that we can share these stories with our kids and tell them that all bad situations are not always bad, they can turn out for good.
I face challenges every day being a black man; God made my skin thick for a reason, I experienced a lot of things in my life to get here, to serve the community healthy food and I know that’s my calling.”

A Note from Deb on our Merger
Scroll to top