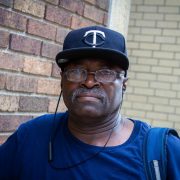 “Is that my grandpa?”

Every time his grandson sees a man that looks a little like Angelo, he asks his mom if it’s him.

It’s been several years since Angelo and his grandson have seen each other.

Those years have been tough.

Since struggling with addiction, losing his home and being incarcerated, Angelo has seen a lot of hardship in the last few years.

And sometimes it feels like he’s still in the middle of it. But Angelo refuses to lose hope or give up on his goals.

That’s a common theme with our clients. Their hope for the future, their goals for what’s next.

On January 22 of this year, Angelo was released from jail. He came to House of Charity and received a bed and a spot in our Day by Day treatment program.

Since then, he has completed the program and is in recovery.

But now it feels like his progress has stalled.

Angelo thought that by now he would have moved out of House of Charity and have his own apartment.

It’s been especially hard since so many people around him are moving to their own places.

“I have a problem seeing people come and then leave and get their own housing and it leaves me feeling some kind of way because I’ve met all the criteria that needs to be met in order to get my housing and there’s always obstacles; there’s always something that pushes me back and it’s kind of hard for me to be glad for those people.”

But Angelo knows that he’ll get there.

“There’s so much that I want but I know I’m not going to get it all at one time so I just have to lay back and deal with it one step at a time.”

As soon as he got out of prison, Angelo knew that the thing he wanted most was to see his family again. To go home to Ohio to see his kids and grandkids, especially the grandson that keeps hoping every man he sees is his grandpa.

Step by step, Angelo is getting there. Angelo said that some days it feels like things just keep coming up to get in his way, that it seems like the steps to complete his goals are unending. But he is making progress; even if it is slower than he would like.

He has successfully gotten off parole.

He is working hard in our Day by Day program and is in recovery. One of the new additions to our treatment program is time spent in House of Charity’s plot in the Gethsemane community garden. There is research that proves that even 30 minutes spent outside can greatly reduce stress. This is a huge part of recovery. Angelo has been a part of that. He said that it has helped him relax and he hopes that when he gets his own home, the skills he’s learned in our community garden will allow him to plant and grow his own garden.

He has a job that some days is his escape from everything that seems impossible. Now he just needs a home and a car. And to see his family again.

“I wanted to get off parole before I could go home and see my family. I made that possible.”

We work with men and women like Angelo every single day. We support them as they move from addiction, incarceration, homelessness or mental illness toward recovery, freedom and independence.

Every day, people like Angelo find hope because they’re not alone.

How to Help Someone in Recovery