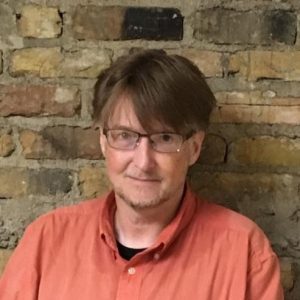 One of the people connected with House of Charity the longest isn’t an employee, it’s a client! We sat down with Kyle to talk about his personal journey on the path for a sustainable recovery, and also how House of Charity has grown over the years.

Q: When did you first use services at House of Charity?

“Around 2006, House of Charity converted their main building to serve more people in a Group Residential Housing setting and I’m pretty sure I was the first person in that program. In 2012, when the Housing First program started, I was one of the first people in that program too, so I guess you could call me the House of Charity resident guinea pig. All new programs are tested for safety and efficacy by me!” Kyle shares with a smile.

Q: You just used the word efficacy correctly. Is it fair to say there is higher education in your background?

“I was able to acquire a Bachelor of Science in Business Finance from the University of Minnesota. After that, I received an MBA from the University of Arizona. Mental illness doesn’t just strike the poor and uneducated and sometimes—as with me—it’s lifelong. Now I see a psychiatrist, and I have a fantastic primary care physician, but sometimes I only receive an hour a month on their schedule. That’s where my House of Charity case manager comes in. I can call her when I need to, and since she’s familiar with my case, she can help with insight, advice and assist with my needs.”

While Kyle admits to being somewhat reticent to be interviewed, he feels strongly that mental illness must be addressed, and not ignored.

“The Centers for Disease Control recently stated that twenty percent of Americans will face mental illness at some point in their lives, so even if it doesn’t personally touch you it WILL affect you in some way, right? We need to change the stigma that’s associated with mental illness.”

The topics of drug use, addiction and mental illness arose, and Kyle continued to share his perspectives about achieving sustainable recovery.

“It doesn’t surprise me that people who are in a bad place want to escape, and that they get into drugs because that’s what we’ve traditionally used drugs for, to escape.” Kyle adds, “Because we don’t fully understand drug addiction, we’ve come to think of it as a moral failing, but a few hundred years ago if a person got sick it was thought it was because they had done something wrong. Until we get past this idea that it is a failing, people are going to hide it. And if we hide it, how are we going to treat it?”

With one final thought, Kyle wanted to leave his impression of House of Charity on his life in a simple way…