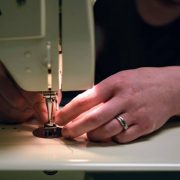 The power of a purple button. You’re thinking to yourself, how does a purple button have any power? I witnessed first-hand how two purple buttons brought a grown man named Tony, to tears. Tears of joy because his favorite shirt that he’d had for years and was missing two purple buttons, was finally repaired. He had held on to that shirt hoping he would once again be able to wear it. A few months ago was that night.
The power of two purple buttons turned this man’s whole day around. I knew nothing of his struggles, but I knew that purple shirt mattered to him greatly. I did learn he had worked in the automobile industry and was a proud veteran. A table full of volunteer sewers that night saw nothing but a man who had proudly served his country and so desperately wanted to wear his favorite shirt again.
I realized early on that clothing evoked an emotional connection for people. Especially when someone is struggling with overcoming an addiction or battling mental health issues. Sometimes a favorite shirt can get you through a tough day.
We mend more than clothes at Mobile Menders. We help mend the soul. We let people know that they matter and their clothes matter. We allow them to share their stories with us and vice versa. We’re building community and sharing stories and there’s an important conversation going on.
So, if you think one person can’t make a difference, I beg you to think again. Because I witnessed it first hand that night.

After founder Michelle Ooley realized there was a dire need for clothes mending in the homeless community, she organized a group of volunteers to hold events offering their skills and time to repair clothes for those in need. Since its founding in June of 2017, the Mobile Menders have grown to more than 200 volunteers and have served countless individuals. The change they have made in such a short time is enourmous. They served 151 people in the first three months of 2018 and repaired 287 items.
We are reminded time and again of the power of one person who is willing to give generously of their times and skills and Michelle and her crew demonstrate that so clearly.
We are so grateful for the Mobile Menders and are continually amazed at the HUGE impact they have on our clients and in turn on us as we watch them give so generously to the people we serve.
Learn more about the Mobile Menders on Facebook or their website: mobilemenders.weebly.com